“The test of a first-rate intelligence is the ability to hold two opposed ideas in the mind at the same time and still retain the ability to function.  One should, for example, be able to see that things are hopeless and yet be determined to make them otherwise.”  – F. Scott Fitzgerald

This wonderful quote pretty much sums up why I am a committed fisheries and water activist.  (I certainly don’t have a first-rate intelligence, but do believe that things look hopeless while nevertheless trying to do my part to make them otherwise.)  I found this quote in the latest issue of Sierra Magazine which is dedicated to climate change.  Of course, it paints a bleak picture if we don’t take serious action now.

The constant steam of news on this topic is overwhelming.  Today, for example, NOAA released a report stating that 2018 was the 4th warmest year on record (139 years), surpassed only by 2015, 2016, and 2017.  Nine of the warmest 10 years have occurred since 2005.  The past 5 years have been the warmest 5 year period on record.  This report also paints a bleak picture of the future.

The Wall Street Journal’s coverage of this story included these graphs.  Global warming it is not being uniformly felt for a variety of complex reasons.  For most of the country, including Oregon, 2018 was “much above average” while the upper Midwest was normal or below average. 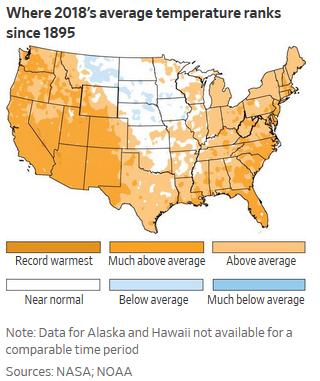 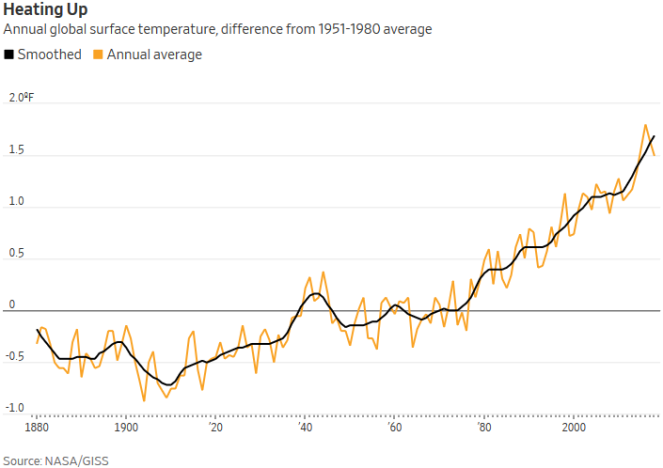 Follow Central Oregon Informed Angler on WordPress.com
Back to top