ODFW has closed the bottom 3/4 mile of the Deschutes River to all fishing starting today through September 15.  “The closure is to protect wild summer steelhead and follows several other regulatory steps ODFW and WDFW have taken to protect wild steelhead this year. Returns of ESA-listed wild Snake River steelhead this year are forecasted to be similar to the extremely poor return of 2017, and there are ongoing concerns about the potential effects of angling on wild steelhead that may gather in cooler water near tributary mouths like the Deschutes.”

Last August I posted “Deschutes Steelheading: Now a Moral Issue” which  asked, “We anglers are now faced with a moral issue: even if most of the Deschutes remains open, can we afford to further stress and potentially kill the small numbers of wild fish that do return?”.  While most of the Deschutes remains open this year, the bottom line is that even the best catch and release practices have a negative impact on wild fish.

Here is the latest graph of wild steelhead returns through Bonneville Dam, the lowest on the Columbia (data as of 8/11/19).  Note that this is essentially all Columbia basin wild steelhead, the Deschutes is a small subset of this.  While this year is a little better than last year so far, it is still well below the 10 year average, and a tiny fraction of the historical run. 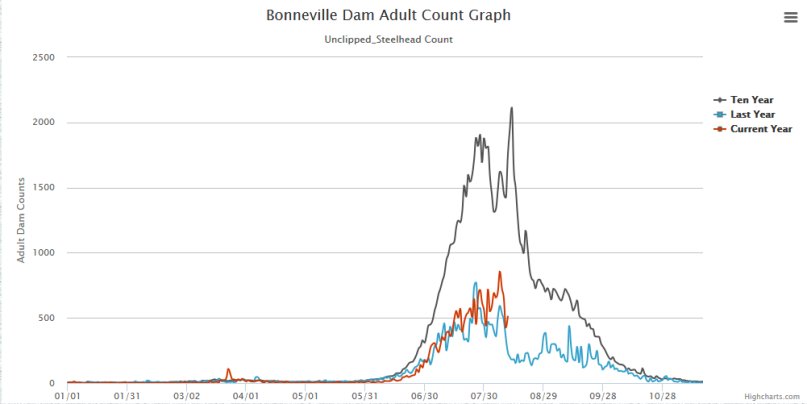 With wild steelhead numbers projected to be dismal yet again, is it moral to fish for them?  These fish could easily be on the path to extinction.  While I am not at all happy about it, for the second year in a row I am going to fish for steelhead elsewhere.  Fortunately, the Rogue and the Umpqua are not that much further away for Central Oregon anglers and steelhead returns there are projected to be more robust.  In fact, the Rogue is fishing quite well already even as high as Grants Pass.